A little “me” time

So Paul is off making great miles. As I have the phone and he has the Delorme InReach we have been able to maintain some degree of contact via text and email. It appears that the youngster Ally (Alison) has spurred Paul on to do mega miles. She is like the energizer bunny, and per Paul rarely takes breaks. They made 25 miles the day before and “cowboy” camped (slept on a mat, no tent) by the 74 and then breakfast’d at Paradise Cafe. During this leg water sources were sparse and Paul regretted passing up the Tule Spring water source for the Mile 140 Guzzler cistern… it was pond scum green water, but water is water and it filtered “ok”. 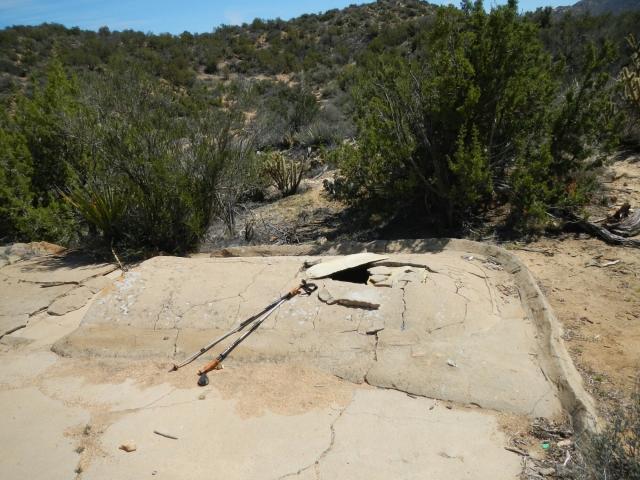 Luckily Paul did not have to actually drink the water as there was an unexpected water cache at mile 143,

Alison at the water cache

and another mile down the trail with Coke and fruit! 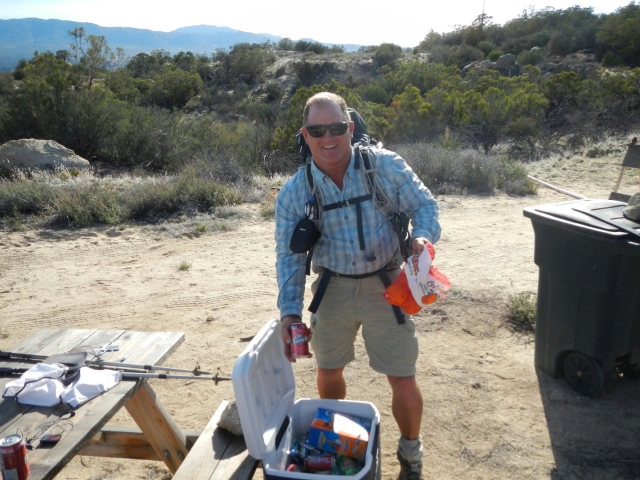 Trail Magic at its best! After a hearty breakfast at the Paradise Cafe (Paul said he gorged on an omelet, toast, hash browns…the works!)

Cindy, at the Paradise Cafe told them to go across the street and wait at the blue sign and they’d be able to get a ride all the way to Idyllwild. They didn’t have to hitch for too long, as Paul said it only took two minutes. They, got a ride from “Mike” in the back of his pickup.

First stop was the library where he was able to email me. There he met up with Thayer as well. After that, Ally needed to replace some of her gear with more hiker friendly apparel.

On the way to the outfitters, Paul ran into Dee’s old boss from State Parks, “Don”, who is working as a search and rescue volunteer with the local Sheriff’s Department, and was participating in a training exercise with his dog who has had several successes finding/tracking lost or missing people. Paul (the ever jokester) when Don asked where I was, initially told Don that he had “traded” me in for a “newer model” gesturing toward Ally, and then told him about my back injury. Funny Man you are. It’s good to know that we have friends who are in the search and rescue business, but then you sometimes would almost rather die, than die from the embarrassment of having to call them for help, since for the most part we know better. (This does not mean that we would not call for help in a life-threating event…we’re not that prideful) This is what motivates us to plan ahead and stick to the plan. Once the town errands were done, Thayer took a different route (Tahquitz Valley Trail) and was not planning on summiting Mt. San Jacinto. Paul and Alison got a ride to the Devil’s Slide trail from “Michael” (who was a masseur in Idyllwild….Dee could have used his services, Paul told him).

Apparently, the Devil’s Slide trail lived up to its name and kicked Paul and Ally’s butt, so much so, that summiting Mt. San Jacinto was now completely off the table. The sunset, however made up for the arduous day. 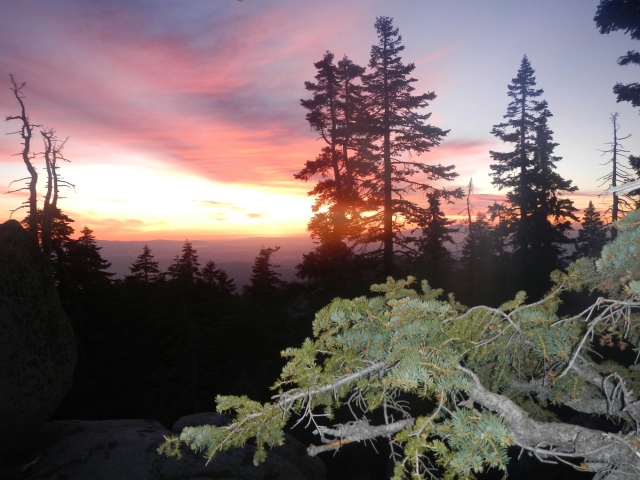 They cowboy camped for a second time, this time ON or rather IN the trail.

Paul is now rethinking us (him) carrying our 3 lbs tent. He said it was 33 degrees, but he was warm and dry when he woke to Thayer, who walked up on him, and jokingly chastised him for sleeping inside the San Jacinto Wilderness area without a $5 permit. Thayer as well was unable to make it the additional few miles out of the Wilderness area, and also had slept on the trail a 1/4 mile behind them. Fuller Ridge was next on the menu.

ANd now for my lovely day…

I on the other hand, spent a good part of the morning trying to squirm my way out of bed without awakening the “angry muscles”. No such luck. Luckily I awoke at 0530, our regular alarm time, and after about nearly 2 hours was able to sit up on the edge of the bed. Another 30 minutes to get dressed and one more Vicodin, and a lot of “heee” breathing I lumbered into our truck to drive to OC Spine for a massage from my “evil” masseur, George, and possibly an adjustment from Dr. Ryan. (sorry Karen, there was no way in hell I was going to make it to Long Beach). After a more than painful session (George actually took pity on me so I didn’t pass out), a minor adjustment from Dr. Ryan and a TENS stimulator machine to challenge the “angry muscles” at their own game, I went home to “rest” on Paul’s recliner, ice and beat my lower back muscles into submission via the TENS machine.

4 Responses to A little “me” time